War, Blood and Peace of the Comacina Island

Home » War, Blood and Peace of the Comacina Island

It may seem strange and curious, but one of the most important sites in Northern Italy for the development of religion, history and late-Roman and high-medieval art is enclosed in a place 600 meters long and 200 meters wide, with a perimeter of two km and an area of ​​less than 12 hectares. It is the island of Comacina, the only island of the whole Lario within a short distance from the west coast of the Lake Como in the town of Tremezzina, nowadays completely covered with lush Mediterranean vegetation. Being in the middle of a tiny area of ​​high landscape and tourist value it unites the Sacred Mount of Ossuccio (Unesco site) and the Antiquarium housed in the ancient hospitalis de Stabio (1169), as well the artistic masterpieces preserved in the beautiful villas Carlotta and Balbianello.  The first evidence of human presence in this completely rocky and mountainous area dates back to the Roman and early Christian times, represented with a marble colonnade found under the church of San Giovanni Battista, perhaps the remains of a temple or a villa from when it was an important fortified military settlement with castle, houses and a large number of churches surrounded by high walls. The new religion was established in this area at the end of the fourth century, thanks to the work of the bishop of Como Abbondio, who eradicated paganism from Valtellina; and Comacina became an episcopal seat. In the late Romanesque period, trying to stop the barbarians, the city of Como assumed the role of outpost for the defense of Milan, which became the seat of the Roman emperor Maximilian Maximilian. Como lake, an area of ​​considerable strategic importance for commercial and military connections with central Europe, was garrisoned by a fleet under the command of a prefectus that also governed Como. A centuries-old conflict that would have opposed the two cities, which ended only with the destruction of both was born here. The island had already chosen to line up with distant Milan, and it was the beginning of its misfortunes. It soon became a fundamental element of a system of defensive outposts. It became really famous in 589, when the Byzantine commander Francione that held it for 20 years, surrendered only after a siege lasting six months; it was the last Byzantine bastion to the north of the Po. Later it became the comfortable shelter for those who rebelled against the Lombard rulers.

A few decades later the island became also famous in distant areas, up to Lazio and Central Europe, for the plurisecular work of so-called Comacine Masters, a guild of specialized construction craftsmen working in the  7th-8th centuries between Como, the Canton of Ticino and Lombardy. Thank to them the early Romanesque architecture and art spread around. In the following centuries (XII-XIV) they were also called “Maestri campionesi”, Campione is another place belonging to another lake (that of Lugano), but a stone’s throw from the Lario.

Como was definitely weaker than Milan, and its many allies including the Larians, but certainly stronger than the tiny island; yet, although this pain in the neck would have been gladly removed, Como could never do it without provoking Milan’s vendettas and interventions. It only had a few opportunities thank to the allying with the German emperors arrived to Italy. It was so in 951, when Otto I of Saxony, emperor of the Holy Roman Empire, and Waldo bishop arrived here and the Ruler of Como besieged the rebel king of Italy Berengario II. The conflict intensified further, excluding any chance for negotiations, until it resulted into the bloody War of the Ten Years (1117-1127) also because of the presence of the army of Frederick I of Swabia, the Barbarossa. Defeated at the Breggia, the Allies were saved from the hard siege of Como just because in 1127 Milan conquered and destroyed Como. But revenge was just postponed. In 1162, in fact, Barbarossa conquered Milan, giving a free hand to the Comaschi that in 1169 completely razed the Comacina island to the ground, knocking down also all the churches (and thus deserving the papal excommunication). An imperial decree of 1175 forbade any kind of reconstruction, that was accompanied by a similar anathema by the Como bishop Vidulfo. The few survived inhabitants moved to other places, in particular to Varenna, and from that moment the island definitively emerged from history, to enter the legend. Milan and its allies united in the Lombard League led by the Carroccio fled to Legnano the Germanic emperor, who never returned to Italy.

A local legend says that in 1435, after seven years of exceptional weather in a gulf famous for its perpetually temperate climate, San Giovanni appeared in a dream to a weaver of Campo, certain Marinoso, indicating that under a walnut tree he would find the remains of the church dedicated to him and destroyed in 1169. Since then every year on the last Saturday of June the patron saint is celebrated with a procession of relics brought by boat, and an evocative fireworks that should remind the fire operated by the allies at Barbarossa , while thousands of lit candles float on the waters of the gulf. 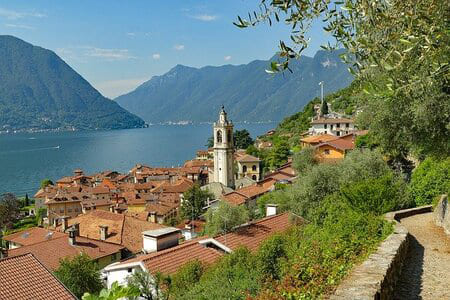 The island can be reached in 10 minutes by boat starting from the pier located under the Antiquarium at the medieval church of Santa Maria Maddalena, located along the highway 340 Regina road and recognizable for the curious gothic square bell tower. It’s a perfect stop for those who travel from Como to Tremezzo or any other destination along the west bank of the Como Lake using the car service provided by Deluxe Limo Italy.

A network of uphill paths leads you to the remains of the survived scarce buildings, brought to light by archaeological excavations conducted in the years 1912-13 and later in the 1958-1979.

The main building on the top is the paleocristian church with two apsises of San Giovanni Battista, the patron saint, dating back to the fifth century, with an octagonal bath for baptism, from when it was the episcopal seat; the oldest is a late-Roman square defence tower-house then used as a bell tower; next to the remains of the Romanesque basilica of Santa Eufemia with three naves and three apses with crypt and portico in front. In the center and to the West you can see the foundations of the churches of Santa Maria in portico (XII century), San Pietro in Castello (1129), and of the female Benedictine monastery of Saints Faustino and Giovita. To the South-West, behind the bar and restaurant-inn, there are three curious modern buildings, the artists’ houses, built between 1933 and 1937 by the a local architect using the traditional local materials such as Moltrasio stone, chestnut wood and stone roofs as well as modern glass-blocking. Their purpose is to temporarily host the artists who want to work in extreme tranquility. In 1917 the island was donated by the last owner to the King of Belgium, Alberto I, who donated it to the Italian state that entrusted its management to the Milanese Academy of Brera through the Isola Comacina Foundation.

And after so much of history, a short, but curious story. As a consequence of the destruction of 1169, the island remained completely uninhabited for almost eight centuries. Then, in 1948, three local friends came up with the idea of ​​building a restaurant, challenging the ancient edict of Barbarossa.

They were Sandro De Col, a champion of motor-racing, the silk industrialist Carlo Sacchi and Lino Nessi, known as Cotoletta. But the work proceeded slowly, interrupted several times because of some mysterious events, until two of the three partners died in a short time of violent death. Fatality? Somebody recalled the words of Vidulfo’s anathema, which had been imposed on that piece of land: “Bells will not ring any longer, stones will not be laid on each other, nobody will host you anymore, the penalty for violations will be violent death.” Cotoletta did not surrender and basing on the advice of an English medium, carried out a propitiatory rite with fire – also documented by his daughter Albertina who wrote about it in the book “The island that was there” – and the adverse forces subsided. For over half a century the inn has been welcoming the tourists from all over the world, including an incredible list of famous people, country leaders, politicians, actors, singers, sportsmen and performers, Italians and foreigners, all equally treated by the host. But still nowadays every lunch ends with a strange infusion: a coffee with liqueur and sugar cooked in a pot over the fire, while a bell rings. The antidote discovered Cotoletta against the curse of the vindictive bishop of Como.