Castell’Arquato: Journey into a medieval fairy-tale

On the picturesque hills of Val d’Arda in the province of Piacenza, the medieval village of Castell’Arquato rises above the hills. Dominating over the landscape, it looks practically the same as it did centuries ago. This town is officially listed as one of the “most beautiful villages in Italy”. Besides holding the title of City of Art, the town was also awarded the Orange Flag of the Italian Touring Club. It’s a recognition given to municipalities that stand for high-quality tourism in their territories. In fact, Castell’Arquato is a place of rare beauty, where a walk along the cobbled narrow streets between brick-colored houses will make you feel like you’re travelling back in time.

The town’s name is believed to have originated from “Castrum Quadratum” indicating the square shape of the Roman military camp at the foot of this hill. However, in its historical records which date back to the 8th century, in 756-758 the local ruler, Magno, built the castle on top of the old settlement which also included it’s first church. This church was late to become the Collegiate Church of Santa Maria and was destroyed by a horrible earthquake in the early 12th century.

Before passing away in 789, Magno donated all his possessions, including the town and its church to the Bishop of Piacenza. It has remained in the possession of the Church until 1220, when the Piacenza’s clergy granted it to the noble families of the town in exchange for an annuity. As many other medieval villages, Castell’Arquato was ruled by a Podestà (chief magistrate) until 1290, when Alberto Scotti became Lord of Piacenza. It was in his time that construction of the historical center of the town began and is still preserved to this day. During the periods of peace and wars, one following the other, the town was under the power of the Visconti, the Sforza, the Farnese and finally the Bourbons until its appropriation in to the Kingdom of Italy in 1860. 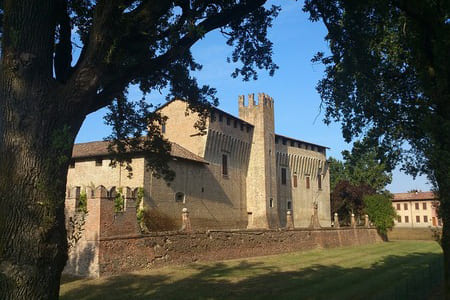 Here at Deluxe Limo Italy, we get to see these amazing places on an almost daily basis and it is awe inspiring every time we go. No matter how many times we have been there before, there is always something ‘new’ to discover.

Here you can really perceive how ancient this village is. Among the beautifully restored houses with their splendid gardens, you will find frescoes and taverns welcoming guests. As you continue to the wonderful central square, framed by the main “jewels” of Piacenza, you are instantly struck by the architecture of the old world. On the north side you can see the Palazzo del Podestà. Its construction was started by Scotti in 1290 and later in the 15th century it was expanded even more. On the wall facing the church, the historic houses and the castle, you can find the city’s powerful crest of lions. In the west part of the Palace you can admire the Collegiate Church of Santa Maria with its stunning arches built in the 14th Century making up the “Portico del Paradiso” and its four apses. This church was consecrated once again after an earthquake destroyed most of it in 1222. From the opposite side you can enter the church where you can still observe the original baptismal font from the 8th century, while from the right side you can access the 13th century cloister and the Collegiate Museum.

If you continue walking across the central square along the medieval houses, soon you will reach the Rocca Viscontea. Constructed by Luchino Visconti in 1342 – 1349, it used to be one of the most impressive military factories of the Northern part of the country. Nowadays we can only see its external structure with turrets and walls surmounted by swallow-tailed Ghibelline merlons. From here the trapdoors were used to drop boiling water or stones onto approaching enemies. The best preserved and the most breathtaking part of this remarkable structure is the castle keep, which is a 42-meter-high tower rising in the northern part of the construction that now houses the Medieval Life Museum and is accessible via a drawbridge. You can climb up to its top and enjoy an unforgettable view over Val d’Arda! The fairy-tale town of Castell’Arquato has some other interesting historical monuments and sights, but the most peculiar one is probably the Geological Museum with its collection of the remains of whales, dolphins, fish and shells from the nearby Geological Reserve of the Piacenziano. It may be hard to believe, but a few million years ago the hilly territory of Piacenza was the bottom of a tropical sea! 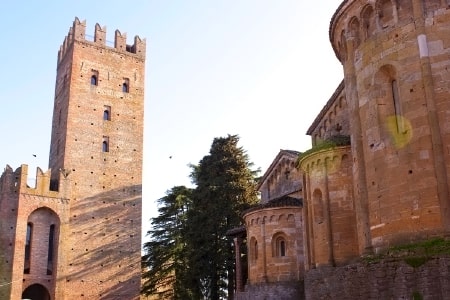 What will you discover? Come see this magical place for yourself! Book your visit here.

Other sights to see here…

Outside the inhabited area, the Basilica of San Giovanni with its Baptistery is definitely worth a visit. It is located in the small hamlet of Vigolo Marchese, just some kilometers away towards Carpaneto Piacentino. It is believed that the Baptistery used to be a small pagan temple built by the Romans. Centuries later, in the early 11th century the church was built by the Marquis Uberto d’Orta, the ruler of Val di Nure. Originally the bell tower was used as a military tower and later transformed for civil and religious use. The atmosphere created by the two religious’ structures, situated in a small park gives the feeling of serenity to everyone who comes here.

Along with the traditional festivals and fairs, Castell’Arquato and its neighboring towns organize events of all different kinds during the year. The most famous one is “Relive the Middle Ages”. It is a reenactment show from the medieval times with a heavy armor tournament. It takes place once a year on the second weekend of September.

The visit of the medieval town also promises to be a pleasant gastronomical experience. They eat very well in Castell’Arquato! The local menu, as everywhere in Italy, starts with appetizers. In this case represented by the mouthwatering cold cuts from Piacenza served with the local version of the hot fried gnocco, fragrant yet never greasy, called chisolini. For the first course you should definitely take the homemade ricotta tortelli, the anolini in broth or even better the pisarei with fasoi, a particular kind of pasta and beans. For the second course you will be offered the stuffed guinea fowl cooked in clay and the roasted coppa.

However, these delicacies should of course be paired with some fine wine. The most popular white wines of this area are Monterosso della Val d’Arda and the Ortrugo, both sparkling. Speaking about wines, the Gutturnio, which is a red wine with an ancient history. It was born in the Roman times from a recipe created by Lucio Calpurnio Pisone, father-in-law of Julius Caesar.

Where to sleep while staying here..

There are some hotels and lots of inns, farmhouses and B&B’s for any budget in the surrounding areas. At Deluxe Limo Italy we can take care of all your travel needs while visiting Italy. Contact us and start planning your magical get away today!

How to get to Castell’Arquato…

The best and easiest way is with a Private driver provided by Deluxe Limo Italy. The driver will take you to this Medieval fairy-tale town in comfort and safety from Milan, Bologna or from any other place you are staying.