“I built for myself a small, but decent and noble house on the Euganean Hills. Here in peace I will spend the last years of my life remembering and embracing with the tenacious memories my absent or passed away friends ” –  wrote Francesco Petrarca in his letter dated January 1371. Today we are going to visit Arquà Petrarca, one of the most stunning historic villages of Italy as well as a UNESCO site located near Padua. In this town surrounded by the conical hills looking like small volcanoes, among the cute alleys, houses made of stone and beautiful landscapes, the poet from Arezzo, old and sick by that time, spent the last few years of his life. Petrarca invited by the ruler of Padua, Francesco I da Carrara, who gave him a piece of land in a quiet village, moved here in 1369. Spending his time in the company of his son, spouse,  granddaughter and a cat, Petrarca alternated working in his garden with the literatury activity. Here he transcribed the “Canzoniere” and worked on the “De Viribus Illustribus”, until he passed away right before his birthday reading Virgil as the legend says. 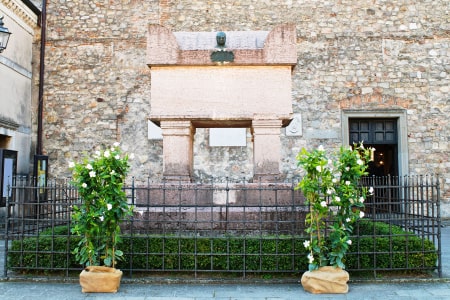 Over the years, lots of famous writers visited Arquà. It came naturally that at some point the Literary Park Francesco Petrarca and the Euganean Hills was created around the house that is now a museum dedicated to the poet. If you come to Arquà you cannot miss visiting his house still having personal belongings of Petrarca such as a chair and a chest of drawers. You will also admire the sixteenth-century frescoes depicting the metamorphoses of the poet and his beloved Laura as well as the iconic portrait of Petrarca wearing the red hood which you will find in the Venus room. You can see the introductory videos and explanatory panels in each room. Once done with the museum take a walk around the village with its main square right in front of the church of Santa Maria Assunta. Here you will also see the large tomb that used to be subject to tampering and robbery: even the skull of the poet had been stolen and replaced with another one. The historic church in front where Petrarca used to come to pray dates back to the 11th century. Curious that the restoration that was done early 20th century reviled the frescoes that date back to the period when the church was just built and belong to the Veneto-Byzantine school as well as some frescoes from the 15th century.

Another beautiful sight worth visiting is Oratory of Holy Trinity and Vicars’ Loggia. First time mentioned in the documents dating back to 1181 this church was admired by Petrarca.  The Romanesque construction remodeled many times over the centuries hosts an altarpiece depicting The Trinity created by Palma il Giovane, the polyptych of Sant’Agostino by Jacobello di Bonomo and a painting The City of Padua in the act of paying homage to a martyr bishop by Giovanni Battista Pellizzari. The Loggia dei Vicari has been recently restored, its roof was demolished and redone in the 19th century.

Just a few kilometers away from Arquà Petrarca there is the Garden of Valsanzibio created in the 17th century and considered one of the most intact in the world. Occupying more than 10 hectares of territory it is decorated with over 60 statues in Istrian stone immersing in an enchanted scenery of beautiful architecture, creeks, waterfalls, fountains and ponds scattered among the trees and other plants.  This incredible complex represents a symbolic path of salvation having a boxwood labyrinth, the Eremita Cave, the Isle of Rabbits and a monument of Time. 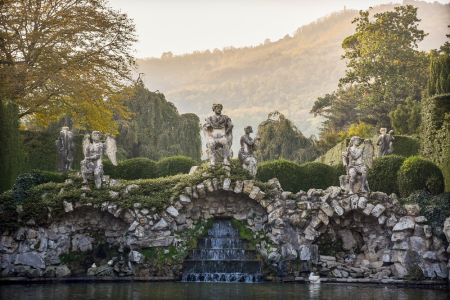 In the past it was primarily literary tourists and enthusiasts who were coming to Arquà, but not only. This territory that used to be occupied by the Adriatic Sea 30 million years ago has something else to offer.  The particularity of the soil related to a series of underwater volcanic eruptions combined with the mild climate allowed this picturesque area to become a good wine and food producer. Red and white fine wines accompanied by mouth watering local traditional specialties, some of which recipes date back to the 14th century, as well as high-quality olive oil will complete your journey to Arquà. You can visit this town during your day trip from Abano, Padua or Venice with a private English-speaking driver  or Driver Guide provided by Deluxe Limo Italy.