There is a beach at  the Upper Adriatic where art, culture and territory merge making this place very different from the many Italian holiday resorts grown from nothing in the post-war period on the wave of the mass tourism boom, welcoming millions of visitors from June to September, but being almost uninhabited during the winter. But there also exists a place with a unique natural environment, preserved with love, and full of discoveries and surprises in any season. It’s particularly charming in autumn or early winter, when there are no so many visitors. Caorle, the little Venice, boasts of an ancient history full of charm and interesting facts. You can easily reach it hiring a private car service from Venice.

At the time of the Roman Empire splendor, the regions of the Triveneto were nothing else, but important centers of civilization and exchange with the peoples of the North and East Europe. The most important city and administrative capital of the region was Aquileia, a village with few inhabitants in the Friuli countryside nowadays. It has an extraordinary museum containing a unique collection of glass from the Roman era. The same about Julia Concordia, these days Concordia Sagittaria adjacent to Portogruaro, that formed a thriving colony and an important military outpost, home to the Tenth Legion maintaining the turbulent eastern borders under control. The name “sagittaria” was attributed to the place because the arrows for the whole army were made here. The Roman presence in Caorle from the 5th century BC is testified not only by the quotations of Pliny the Elder, but also by the artifacts found and partly represented in the National Museum of Sea Archeology. 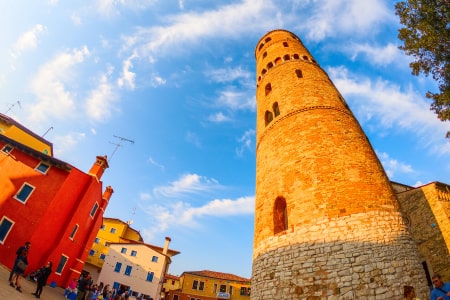 The era of barbarian invasions following the fall of the Western Roman Empire was a particularly hard period for the North East. The cities were depopulated, businesses languished, Caorle practically disappeared. When around the sixth or seventh century after Christ the bishop of Concordia moved here and brought the relics of the concordant martyrs, including the venerated Saint Stephen’s skull with him, a city closely related to distant Constantinople was born on the Adriatic.

You can “touch” this early medieval history in the center of Caorle, in the Campo del Vescovado, where the plan of the ancient original church is marked on the ground. It was replaced with the current cathedral dedicated to St. Stephen protomartyr in 1038. Images of two saints stand out on the façade: Sant’Agatonico and San Guglielmo that witness the oriental cults related to the exarchate of Ravenna, which exercised its influence throughout the upper Adriatic at the time. Inside the church of the three naves separated with Roman columns, in the apse there is the precious Pala d’Oro, donated by the Queen of Cyprus, the Venetian Caterina Cornaro, to the people of Caorle, that rescued her after a shipwreck. Separated from the square in front there is the cylindrical bell tower, 40 meters high and surmounted by a conical Romanesque-Byzantine cusp, leaning by 32 cm: it is one of the very few bell towers in the shape of “pointed pencil” handed down from the Middle Ages. Climbing up the bell tower in a sunny day you can enjoy an incomparable view of the town, the lagoon and the sea. Next to the church, there is a small parish museum that has the reliquary of the skull of St. Stephen, as well as many other relics and sacred furnishings. 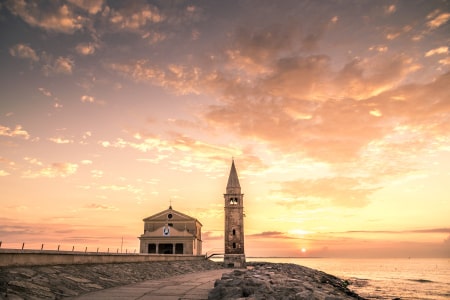 Finding a cathedral of this historical and artistic value in a municipality that today has just about 10,000 inhabitants, including the villages of Brussa, Porto Santa Margherita and Duna Verde, can be a surprise for those unfamiliar with history. Caorle remained an important city for centuries and had become rich thank to the rights of fishing and the shipbuilding, the famous galleys of the Serenissima that participated in the battle of Lepanto in 1571.

The graceful system of the canals in the heart of the town that really made a miniature Venice of it was buried at the end of the eighteenth century for hygienic reasons and survived only in the different “Rio Terà”, which together with the fields, streets and squares gives an authentic and lively Venetian look to the historical center of Caorle nowadays.

The fall of the Serenissima accelerated the decline: in 1818 after eight centuries the Episcopal seat was lost and Caorle survived only as a small fishing village. At the beginning of the 1900s the village had just one thousand inhabitants. Private land reclamation began in the second half of the 19th century, with the large estate of Ca ‘Corniani owned by Assicurazioni Generali: 1800 hectares to be visited not only for the wine and local products tasting. 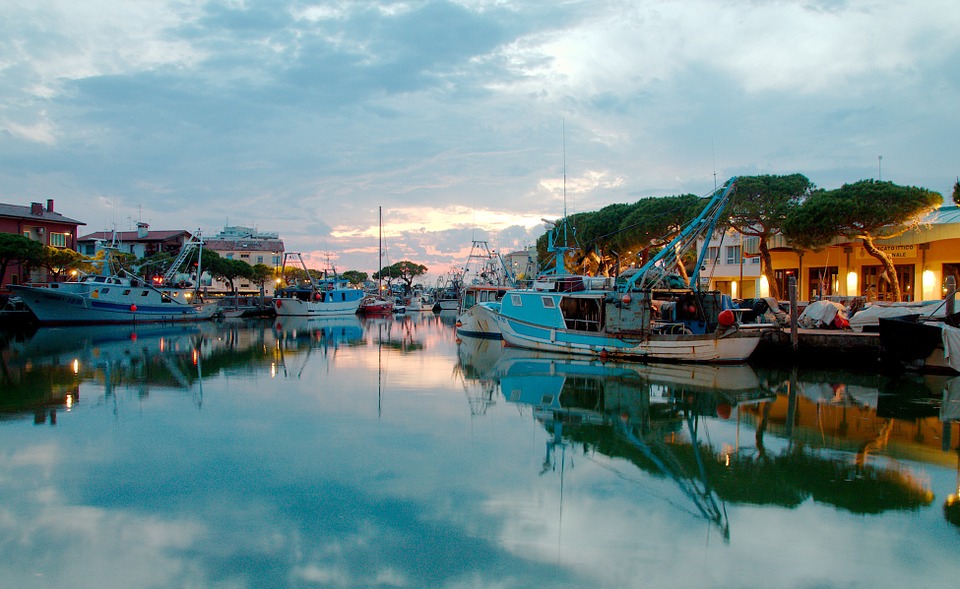 Caorle today is a piece of land between the mouth of the river Livenza and Porto Falconera, where the lagoon opens onto the sea, separating it from the island of Brussa with its natural park of the Valle Vecchia enclosing 700 hectares of intact environment that can be visited only on walking, by bicycle or boats going along the canals.