Driving to Montagnana, the City of Art and Authentic Flavors

Home » Driving to Montagnana, the City of Art and Authentic Flavors

Montagnana: a Perfect Sightseeing Opportunity During Your Limo Transfer

If 2018 was named the Year of Italian Food by the Ministry for Cultural Heritage, 2019 will be that of “Slow Tourism”, meaning a way to enhance the Italian territories less known by international tourism and relaunch them in a sustainable mode, encouraging the innovative ways of travelling without rush. This is the way to discover the treasures of Italy that with fatigue and pride preserve the cultural and historical heritage through the use of antique trains, cultural itineraries, cycle tracks, and horse riding. Montagnana, an authentic medieval pearl of the Veneto countryside, considered one of the most beautiful villages in Italy, is absolutely the right destination to be discovered. Halfway between Padua and Verona, Montagnana is among those walled cities surrounded by perfectly preserved medieval walls that help you identify the historical city center. Being a destination rich in historical, cultural, enogastronomic and recreational opportunities, Montagnana can make it a comprehensive tourist experience taking into account the characteristics of the Veneto Region, thanks to its privileged geographical position that you can comfortably reach with your private driver, with a short detour, ideally when you book one of our Florence to Venice chauffeured transfer or on the way from Venice to Milan.

Get to a City of the Medieval Charm by Luxury Limo

The majestic beauty of the famous city walls (dated back to the XIII – XIV centuries) that embrace its historical center with 24 towers of 17 meters high, is surrounded by a wide moat making up a wide green area nowadays, is not the only thing to charm the visitor. The glorious past of the city becomes even more obvious thank to the the fine art works along the streets and sumptuous palaces. These include the famous Villa Pisani Sacco, designed in 1552 by Andrea Palladio (since 1996, a UNESCO heritage along with other Venetian Palladian villas), and the majestic Cathedral of S. Maria Assunta overlooking Piazza Vittorio Emanuele II, the silent custodian of valuable works of art including some frescoes by Giorgione, an altarpiece depicting the transfiguration of Christ by Veronese, and the high altar by Sansovino.
The oldest part of the town is represented by Castel San Zeno, or Porta Padova, composed of two angular lookout towers and the grandiose 38 meter height Mastio Ezzelino. From the castle you can see the covered wooden walkway, that is being used for public needs nowadays (conference rooms and exhibitions), while the rooms of the castle host the Castles Study Center, the Civic Museum, the Municipal Library, and the Municipal Historical Archive. Leave your car and chauffeur for while and enjoy the walk around the town. 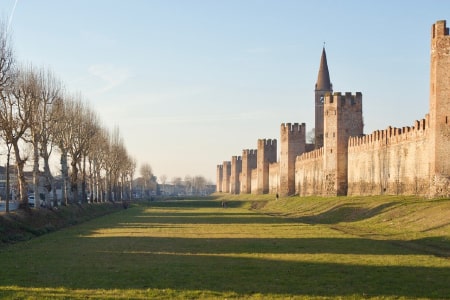 Limousine Service to Come and Appreciate the Territory

Over the years the city has been awarded numerous honors and certificates, including the Orange Flag of the Italian Touring Club, assigned to the inland villages that stand out for the development of sustainable tourism and the territory protection. Montagnana was also officially recognized as one the most beautiful villages in Italy. In addition to the artistic and architectural beauties of magnitude, the territory offers the luxuriant nature to the slow and green tourism lovers. After having reached the place with a private limousine service one can enjoy nice walks, pleasant bike and horse excursions in the countryside and along the waterways admiring the old farmhouses, small country churches, and landscapes dotted with valuable agricultural crops and orchards. Those who prefer longer itineraries, can follow the routes that will lead them the magnificent Venetian Villas, scattered along the waterways or in the countryside, or other beautiful walled towns. 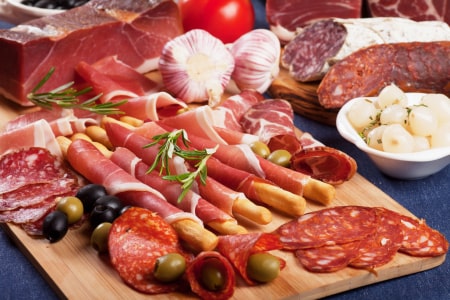 But it is its agri-food productions that gives the value to Montagnana these days. In fact, the territory offers the unique food products such as the Veneto Berico-Euganeo D.O.P ham, pancetta, cotechino, salami and high quality cooked ham. Recently the process of valorisation of the DE.CO (denomination of municipal origin) production along with the production of the Montagnana melon, the schissoto (typical home-made bread of the Venetian farmers of the past), the Veneto sweet gnocchi (a very popular ancient recipe from the territory of the lower Paduan area) and green peppers pickled in vinegar is happening. Since the Law 142 came into force in 1990, the municipalities were incentivized to legislate the promotion of the productions present in their territories. The most virtuous municipalities, such as Montagnana, have been able to grasp the legislative instrument that was an opportunity for marketing and unique enhancement of their territories.